It's been a while between menu planning posts, I know.  I've been away at Group Leader training almost a month ago now but came back and went into Head Down Bottom Up mode and have only just emerged.  Along the way I cracked a rib while choking on granola (more painful than I ever could have imagined), have been sick, dealt with Mr MLT's man flu and spent forever organising school P&C stuff.

Obviously, we've been eating meals but they've been very much in the fashion of "holy dooley Batman, it's 4:30pm and I have to get dinner ready, what are we going to have".  I don't work well with that, it just adds to the chaos for me rather than resulting in spontaneous creative dinners as it does for others I know.  Without a plan, we end up with the simplest thing I can think of at the time - which could be why Sam's started saying "what's for soup tonight" rather than "what's for dinner".

So, it's good to be back menu planning and baking again!  Here's what we've got planned:-

Monday:-  Baking:   bread (and lots of it!), Thai Green Curry Paste, Quinoa Choc Chip Muffins (final tweak of the recipe), potatoe pie, granola, Fruit Compote (for porridge during the week), Coconut Bars (final tweak of this one too, fingers crossed!) and some Pesto.

Jack is cooking dinner tonight and has voted for Chicken & Vegetable Pie followed by Coconut Sago.  While he's cooking the chicken pie, I'm going to do a dozen smaller versions for lunchboxes this week with some diced vegies and leftover pulled beef.

Tuesday:-  We're having Coconut Prawn Curry, which has been on the To-Do list about 5 times now and each time I haven't been happy with the prawns available and so it's been shelved.  I'm going straight to the Raptis market on Tuesday though - I've got a delivery out that way, so we're sure to strike gold this week.

Wednesday:-  I've been quite keen to try the Seafood Chowder from the beautiful Devil of a Cookbook.  Given I'm hunting and gathering seafood the day before, I thought this was a perfect chance to give it a go.

Thursday:-  A favourite of ours, Quirky Cooking's Lentil Bolognese.

Friday:-  I'm out all day Friday, so on Thursday night I'm going to prepare Butternut Pumpkin Mac & Cheese ready to pop into the oven when we get home on Friday night.

Saturday:-  I've got a leg of lamb sitting in the freezer that I had the butcher chop up for me at some point for some reason that I can't remember.  Our next meat delivery isn't far away, so I'm trying to free up freezer space, so I'm going to do a slow cooked lamb curry on Saturday afternoon and follow it up with the sensationally good (as in, unbelievably delicious, make it as soon as you can!), Persian Love Cake.

So, that's what's happening at our table this week.  I hope you've got oodles of deliciousness planned for your week too - happy mixing everyone! 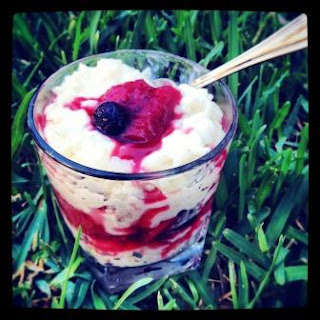 My boys are really starting to hit the End-of-Term wall.  In the past 10 days I think Jack has lost a different article of school clothing or equipment at least every day whilst Sam wakes up every morning and asks if it's Saturday yet.  So, being the softie that I am, I decided that a National Costume Day was well overdue and kept them home "sick" today.

Blessedly, they both slept in.  Which gave me time to think a bit more about a breakfast risotto my friend ordered when we went to brunch the other day.  With some rhubarb sitting in the fridge just waiting to be used, I got to work.

The result was a sweet and creamy risotto accompanied with a rather delicious fruit compote.  It's not what I'd feed my boys for breakfast ordinarily, but a nice little National Costume Day treat.

Set aside to cool.

2.  Insert butterfly and add rice and liquid to TM bowl.  Cook for 18 minutes, at 100°, on reverse, speed 1 with the MC removed.  During the last minute of cooking, tip the whisked egg into the mixture through the MC opening at the top.

Serve with the fruit compote and marscapone.

Email ThisBlogThis!Share to TwitterShare to FacebookShare to Pinterest
Labels: Breakfasts

My sincere apologies that it has been a month since my last post!  What's that about???

To make up for the long delay, we're having a little Winter Warmer competition.  To enter, you just need to email me a photo of your favourite Thermomix winter warmer dish, together with the recipe.

Mr MLT will channel his inner George/Gary/Matt and choose the top 3 recipes which he thinks look the most inventive.  We'll then cook those and the tastiest will be crowned the winner!  Whilst the glory of being crowned winner is an awesome achievement in itself, I'll also pop a post of Budget Busters in the post for our winner.

So, trawl through your recipes, choose a winter favourite and send your entry in!  Entries close Saturday, 30 June 2012 at midnight.
Posted by Brooke Long at 11:55 AM No comments: