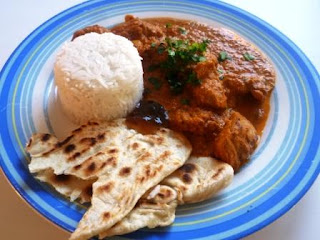 Masterchef Series II may well be long forgotten now, but some of the recipes I gained from it are well and truly firm favourites in our house.  Probably at the top of those favourites is the absolutely sensational Butter Chicken from Jimmy Seervai.
This recipe is a little more involved than most of the Thermomix dinners I post, only because I still think you need to brown the chicken in the pan.  You could cook it in the Thermomix without issue, but in my opinion doing the chicken in the pan still produces the best flavour.  It's also not as quick and easy as most of the other dinners we do mid-week, but it's worth the extra time and effort.
It was also recently brought to my attention that it's one of the few Butter Chicken recipes which are nut free, so if nuts are an issue for you - this is the one for you!  I hope you enjoy it - I think it's the best butter chicken recipe ever.


·     Place ginger and garlic in TMX, chop on Speed 7 for 10 seconds
·     Add yoghurt, 1 tbs garam masala, lemon juice, oil and half the coriander.  Blend on Speed 4 for 5 seconds to combine.
·     Tip marinade into container, add chicken and cover.  Refrigerate for at least 3 hours.
Step 2: Chicken & Sauce


·    Preheat a pan over medium-high heat.  Remove chicken from marinade and brown in batches, turning each bath for 6 minutes or until cooked through.
·    Whilst browning the chicken, prepare the sauce as follows:-
o   Place onions and chillies in TMX, chop on Speed 7 for 10 seconds.
o   Add ghee, tomato paste, 1 tbs garam masala and turmeric.  Saute at 100° on Speed 1 for 5 minutes.
o   Add passata and cook at 100° on Speed 1 for 5 minutes with MC Lid ajar.
o   Add cream, mint and remainder of coriander and blend on Speed 3 for 10 seconds.
·    Reduce heat in pan to medium low.  Return all chicken to pan and tip sauce from the TMX into the pan with the chicken.  Stir to combine.
·    Simmer for 15 minutes whilst rice is cooking.
Step 3:  Rice

1.  The quantities here do tend to make a lot of sauce.  I will often bottle half of it and save it for later in the week and only add half the quantity to the chicken pan.
2.  I can’t serve any meal without greens on the plate, so I usually steam some broccoli and snow peas in the varoma while the rice is cooking.  The broccoli needs about 10 minutes, but the snow peas only about 4 minutes.

3.  I make flat breads to go with this, because my boys love dipping the bread in the extra sauce.  I do the dough before I start the chicken & sauce.  It has time to rest while I’m browning the chicken and making the sauce.  I roll it out and lightly fry it while the chicken is simmering and the rice is cooking.
FLAT BREADS (adapted from Callum Hann’s recipe in Masterchef Series 2 Cookbook)
Ingredients:-
200g bakers flour
2 tbs pure cream
Olive oil, to fry
Method:-
Posted by Brooke Long at 1:44 PM 2 comments: 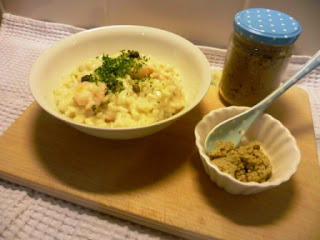 A few days ago I had a big "jar replenishment" session which saw my Thermomix turn out jars of almond butter, cashew butter, tomato sauce, tomato paste, vegie stock paste, chicken stock paste, fish stock paste and Tenina's fabulous umami paste.
I used the chicken stock paste in what is possibly one of the nicest risotto dishes I've found for the Thermomix so far.  The recipe comes from the lovely Chelsea at Full Little Tummies.  Chelsea's blog is a great one to follow - she has dishes which are quick, easy and my boys love them.
So, given it's not my recipe, it's not quite a Cook-A-Long with Brooke-A-Long.  I think these are two recipes definitely worth adding to your repertoire though, so I'm giving them both a big thumbs up.

I'd really encourage everyone to make the Chicken Stock Paste from the My Way Of Cooking recipe book.  If you don't have the book, you can download all the recipes from it on the Thermomix App (or if you're not IPad/Phone/Pod connected, let me know and I'll get it to you).
Once you've made your stock, then try out Chelsea's Garlic & Prawn Risotto.  It is delightful!
Let me know what you think and what you've been cooking at your place lately!
Posted by Brooke Long at 10:14 PM No comments:

Back to School Baking 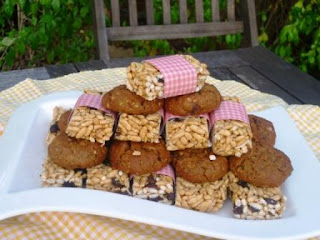 The Spring school holidays came to a close and the boys went back to school and kindy this week.  I would have gladly taken an extra week of holidays - it feels like a 2 week break is only just long enough to unwind and start relaxing.  Sad as it is, school resuming has however given me a chance to bake (hooray!) and also to catch up on the pile of paperwork that was consuming my desk.

To start lunch boxes off for the week, I threw together a batch of super yummy Fruity Puff Bars from Chelsea over at Full Little Tummies.  My only alteration is that I only use 50g rapadura (and they're still pretty sweet!).  I also baked a batch of Apricot and Oatmeal Cookies, which my kids eat as fast as I can bake.  The original recipe comes from the Thermomix Forum and I've slightly tweaked it to my taste.  I add pistachios to mine, but you can easily omit the nuts and up the apricot quantity instead.

4.  Add dry ingredients to TMX bowl (except for the bicarb).  Mix for 5 seconds on Speed 3, Reverse.  Set aside (or swap to your second bowl).

6. In a cup, add the boiling water and then the bicarb and stir to combine and then add to the butter mixture in the TMX bowl for 5 seconds on Speed 2.

8. Put tablespoonfuls of mixture onto prepared trays, spaced 5cm apart. Bake in oven for 15-20 mins or until golden.

9. Allow to rest on tray 5 mins, and put on wire rack to cool before serving.