Radio silence is over, hopefully!  My apologies - we've just been B.U.S.Y.  We're always busy (who isn't!), but these past few weeks have been crazy busy - you know the kind where you curse the fact that there are only 24 hours in each day because that's just not enough!!!  That's been us for the past month, but thankfully we've made it through - mostly still in tact too!

I sewed my first zip during these last few weeks.  I was reflecting the other day why I didn't do home-ec at school.  It was the sewing aspect that put me off.  I cook.  I do not sew.  My Mum taught me not too - everytime she'd sew, we'd all clear out of the house.  It's not that she couldn't sew - she absolutely could.  It was just dangerous to be around when she did in case you got hit with something she'd throw in a fit of rage at her machine.  No wonder it never looked appealing to me.

So, when faced with the fact that I had to hand sew a 2m zip into the chicken pen netting, I was less than confident.  It took forever but, so far, it's holding.  Let's just say, I'd rather cook than sew, any day.  I should have bribed crafty sewing capable friends with food - why did that not occur to me before now!!!

Anyway, the good news is, we're back on deck.  Which means, I've finally gotten around to menu planning for the week again, rather than pulling out a previous week's plan and giving it a re-run (which I find is always an excellent back up).  So, here's what's appearing on our table this week.

Monday:-  We're having Quirky Cooking's Roast Chicken with 40 cloves of garlic which is delicious.  Thermomix mashed potato and greens on the side.  Sensational rainy day food.

Tuesday:-  I have about an hour from the time we walk in the door after swimming on Tuesdays until Sam wants to go to bed.  If I can feed him early we avoid the drawn out agonising mealtime, where every spoonful is an effort for him.  So I often make something before school pick up and then throw it in the Thermosever, so it's ready to dish out as soon as we get home.  This week we're having Quirky Cooking's Lentil Bolognese - perfect Thermoserver food!

Wednesday:-  A friend emailed me her recipe for Coconut Prawn Curry, which she swears is as good as my adaption of Jude Blereau's Fragrant Fish Curry.  It looks fabulous, so I'll keep you posted. 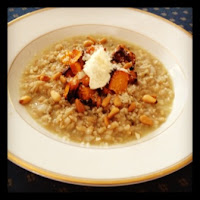 Thursday:-  We're having Aush.  I'm going to try a recipe for Pain Viennois from a Thermomix blog I just love - Journal of a French Foodie.


Friday:-  My boys are running their Cross Country on Friday and then again on Saturday.  We're having Barley & Pumpkin risotto - they'll need something nourishing but also easy to eat.  This fits the bill.

I hope you all have a fabulous week and that there's lots of delicious and nourishing things appearing on your plates.  Feel free to share, as always!