I've been asked a few times lately about how I make yoghurt.  My boys go through at least 1kg of yoghurt a week, so it's well worth my time making the yoghurt rather than buying it.

In terms of cost effectiveness, the yoghurt I was buying was the Jalna Organic Biodynamic Natural, which is about $6 per kg.  I now make double that quantity for almost half the price.  I buy 2L of organic milk through a diary co-op and, factoring in the price of my culture, 2kg of yoghurt costs me around $4.

There is a recipe in the EDC which works perfectly fine for a lot of people.  I didn't want to use powdered milk though, so I scanned a few recipes and in the end, this is the one that works best for us.

Try it out and see how you go.  If you need to source good culture, I've used both Cheeselinks and Nick's and been very happy with their service and their culture.  The one we use all the time now is the Type C abY Yoghurt starter from Cheeselinks.   If you don't use a dried culture, you need to use a very good quality live organic yoghurt - the Jalna one is okay, but either Barambah or Paris Creek is better.

1.  Measure milk into TM bowl and cook for 15 minutes at 80° on speed 2.  This kills off any unwanted bacteria.

2.  Allow the milk to cool to 37°.  (Warning:  this can take forever!!!  Don't think to yourself "oooh, we're out of yoghurt, I'll just make some now before I go to bed" at 10pm one evening, unless you're not planning on going to bed until midnight.) 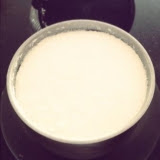 Pour into Thermoserver and leave, undisturbed, for at least 12 hours before placing into the fridge.  As tempting as it is to open it up and see how it's going, it's really important not to disturb it for as long as possible.
I personally find the easiest way to set my yoghurt is to put my Thermoserver into my oven and turn the oven on to 35°.

I tend to leave it in there for about 15 hours and then place it into the fridge.  If your oven doesn't go that low, try putting it into an esky and pack it down with towels - the key to getting it to set well is to keep it warm for as long as possible. 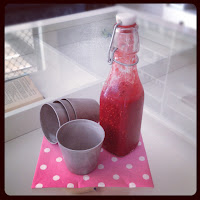 Once set, if you want to sweeten your yoghurt the easiest way to do that is by making some fruit coulis and stirring it through.

I use the recipe from the EDC (reducing the sugar content), bottle the coulis and just add it as a sauce to the yoghurt when I'm looking for an extra hit of sweetness.

To make labna (a yoghurt cheese similar in texture to cream cheese), strain your yoghurt through a cheesecloth.  The longer you leave it to strain, the thicker it will become.  It's beautiful then used as a dip base and in cheese balls.
Posted by Brooke Long at 11:44 PM