How To: Pulses and Legumes 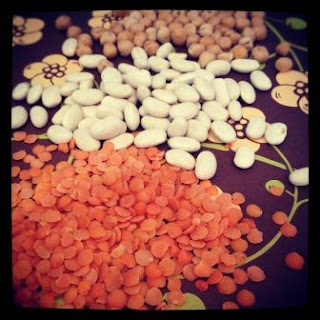 One of the food goals I've been trying to adopt is the reduction of using canned pulses and legumes.  It's for two reasons really, the first being that the majority of canned goods now come in cans that are lined with BPA.  The second being that the cost of buying organic pulses and legumes that are in BPA free tins is ridiculously high, when compared with just buying them in an organic dried form.

I'm struggling with tomatoes and are still buying them canned.  Next time tomatoes are super cheap at the market I plan to buy up big and preserve them myself.  In the meantime, I'm trying mostly to just use fresh tomatoes, but having a couple of cans in the pantry is a great backup.  I buy the Spiral Organic brand - they're the only one I can find that are BPA free and organic.  Spiral Organic are also the importers of the canned beans I prefer to use - Eden Organic.  They're not that much more expensive than the organic canned beans you buy at Coles and Woolworths, but have the advantage of not coming in a BPA lined tin and are also cooked in kombu.  Kombu is a kelp that adds nutrients when used to cook beans and also improves their digestibility.

However, as handy as the tinned stuff is, it isn't as good as soaking it yourself.  So, I've been trying to do a lot more soaking and cooking of pulses and legumes, as we're also trying to include more of them in our meals.  It does take a bit of foresight - obviously if they have to soak overnight it's no good thinking about it 5 minutes before you need them.  I find that this is where menu planning helps a lot!

If you're wanting to start soaking, here's a guide on how to do it:-

1.  Soak beans in about three times their volume of warm water (i.e. one cup of beans to 3 cups of water).

2.  Leave for 12-24 hours.  (At this point, if you are soaking black beans then you need to add something to make the water acidic - either 2 tablespoons of whey or lemon juice will do the trick.)

3.  In the morning, scrape off the scum and rinse thoroughly.  The soaking water contains all the gunk expelled as the phytic acid and enzyme inhibitors are broken down.)

4.  Place in a large pot (I use a stockpot) and cover with twice their volumte of warm water.  Bring to the boil and skim off the foam.

5.  Reduce the heat and simmer.

Cooking times vary and you need to test them to see when they're soft.  Nourishing Traditions gives a guideline that they'll take between 4 and 8 hours.  I have friends who cook their legumes for a lot less time, following The Good Cook time guidelines.  (If someone can tell me which timing is better, that would be great!  I see no need to cook something for an extra 4 hours, unless there's a nutritional benefit to doing so.)  As a general rule, kidney beans, chick peas, navy beans, soy beans take on the longer side, whereas lima beans, aduki and lentils take less.

I'm working on a beautiful navy bean & chicken soup today, so stock up on some beans and get ready to soak!

Email ThisBlogThis!Share to TwitterShare to FacebookShare to Pinterest
Labels: How To Guides