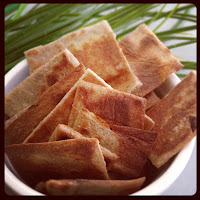 I have a small confession to make.  This post was supposed to be up about 2 weeks ago.  I thought I'd done it, really I did.  Then today a lightbulb went off in my head as I was munching on the last of these crackers.  Had I published the post, or was it still sitting in my drafts?  Turns out, it was still in my drafts.  So, here it is (a little later than I intended).


This Cook-A-Long recipe is from the very lovely Aileen Sforcina's recipe book, Rainbow Recipes.  Rainbow Recipes is jam packed with 200 vegan recipes with both a conventional and a Thermomix method listed for each one, making it a fabulous resource for both Thermie owners and non-Thermie owners alike.

I was keen to try this recipe because crackers are yet another commercial item I'm trying to cut out of our family's diet.  So far, this recipe and also Tenina's Spelt and Rosemary Crackers, have been the winners.

I'd encourage you to step a little outside the Vita-Weet square and give these a go.  They were super easy to do, especially using the sandwich press.  A big thanks to Aileen for giving me permission to share this recipe with you - I hope you like it!

1.  Place dry ingredients into TMX bowl and mill for 2 minutes on speed 9.
2.  Add all other ingredients and mix for 6 seconds on speed 6.
3.  Pinch off bits of the dough in small amounts and roll out very thinly between layers of baking paper.
4.  Bake in oven or sandwich press until lightly browned. 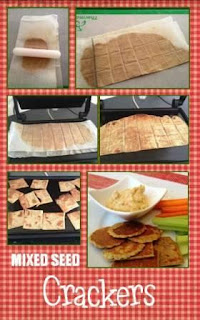 I used the sandwich press for these guys and it was super easy.  I found it easiest to roll the dough out really thinly and then score it with my palette knife.

I then put the dough into the sandwich press still between the pieces of baking paper, until it was starting to crisp.

Then I took the paper off and gave it a little longer.  I then broke the crackers up and gave them just a touch longer, all laid out individually.
Posted by Brooke Long at 8:41 PM